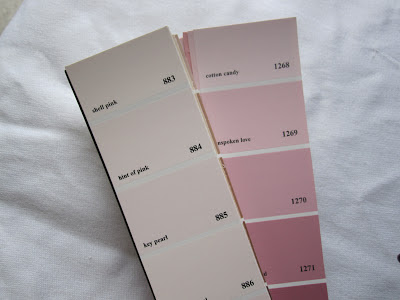 Summer has given way to some seriously lazy mornings but I am feeling the itch to tackle projects around here. 2 1/2 years after moving in, I have chosen a paint color for my youngest daughter's room. Its about darn time!
I waffled between pink or pale gray for the last 6 months but a recent decision to paint my older daughter's room gray pushed me in the direction of pink. I know, I know...flow but it will work because it is in view of the living room which is a similar color and I don't want the bulk of my house to be gray.We also have plans to paint the large open spaces gray. 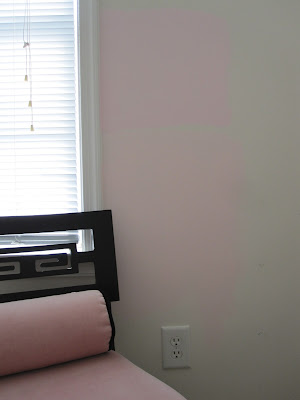 Over the weekend I grabbed two samples from a local Benjamin Moore dealer. I chose BM 1268 Cotton Candy and BM 885 Key pearl. I have been over and over my "one lighter" rule with my husband so many times that he got the right answer at quiz time. My "one lighter" rule is to choose a paint chip that you like and go with one a shade lighter even though it appears too light. This is especially important to me when I want an understated color in a bedroom. For this room I want the walls to be pink but not say pink. Like my very pale pink/coral living room. 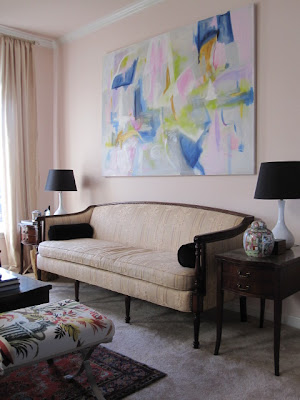 Once I had the paint samples up, I asked my 16 year old daughter her opinion and she chose the bottom sample (Key Pearl) 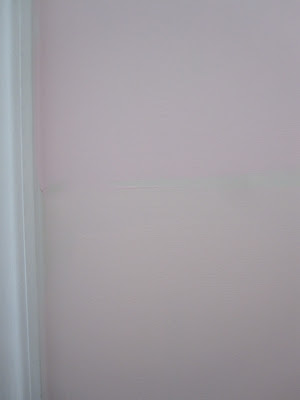 and then I showed her the paint chips and she was really surprised that Key Pearl was the one she chose since it reads nearly white on such a small sample.
This was my sneaky way of eventually influencing her paint color choice later this summer.
If you don't already buy and try paint samples, I encourage the investment of time and money. I spent less than $9 on two sample cans so that $100+ is the right choice.
Now if I can just get going with the actual painting.
Posted by Kerry Steele- Design du Monde at 8:58 AM

Email ThisBlogThis!Share to TwitterShare to FacebookShare to Pinterest
Labels: color, my house

I am loooooving your living room pink! It was made for it!

I think that color is beautiful! It's going to look great!!

good luck kerry, don't worry you are not along, I still have yet to paint my boys bathroom after 2 years of contemplating! :-) Love the color!

Hooray for pink! And when you're done over there I have a few rooms over here you can get started on. 3 of them.

I adore a pale pink!

I wish we lived near each other. I love to paint and would have that room whipped out for you in no time.

That one lighter trick is brilliant! It would have saved me extra samples. Love the color.

love this color pink - it's so pretty and fresh. would love for you to link up one of your beautiful spaces over here - it's a month long link up and we showcase bloggers' homes each month. your paintings are beautiful and would love to share when with my readers.
-- jackie @ jade and oak

Kerry Steele- Design du Monde
I am an artist (and former interior designer) transplanted in Charleston, SC, writing about my own design journey, my inspiration and my love of art.

Signup for art news from Kerry!

See all of the rooms here 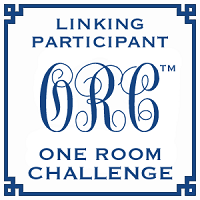